Animoku is back with a list of Top 10 Greatest Swordsmen to Ever Live in Anime. Just agree to it, we all have a thing for samurai, swordsmen, and blades. At one point of life everyone has pretended to have a sword fight or maybe actually had one, although I doubt the chances of the latter one being low. So let’s take a look at who are the Top blade wielders in Anime. Don’t forget to Share and Subscribe to Animoku on Facebook, Instagram, WordPress.

“These flowers are beautiful now but eventually they’ll wither and turn into dust, like the friend beneath them. “

Himura Kenshin, known as the legendary Hitokiri of the Meiji Revolution, Himura Battōsai, is the main protagonist and titular character of the Rurouni Kenshin series. Kenshin has spent ten years traveling Japan as a Rurouni in search of redemption, carrying a sakabatō with the vow to never kill again. In early 1878, he arrives in Tokyo and takes up residence at the Kamiya dojo, where his vow is tested as he fights to keep the country’s peace.

“Only those who have suffered long, can see the light within the shadows.”

Roronoa Zoro, also known as “Pirate Hunter” Zoro, is a pirate and a former bounty hunter. He was the first member to join the Straw Hat Pirates, and, to date, is considered the largest threat and most dangerous member of the crew after Luffy. His fame as a master swordsman and his great strength, along with the actions of his captain, sometimes led others to believe he was the true captain of the crew before he obtained his first bounty. He is one of the top three fighters in the crew alongside Luffy and Sanji, and his dream is to become the greatest swordsman in the world. Zoro is also regarded as one of twelve pirates who is referred to as the “Worst Generation” (formerly known as the “Eleven Supernovas”). He currently has a bounty of

“Zangetsu, I won’t ask you to ‘lend me your power’ any more. And I won’t tell you ‘don’t get in my way’. I won’t even say ‘let us fight together’. I’ll fight for myself. Thank you, Zangetsu. You are me.” 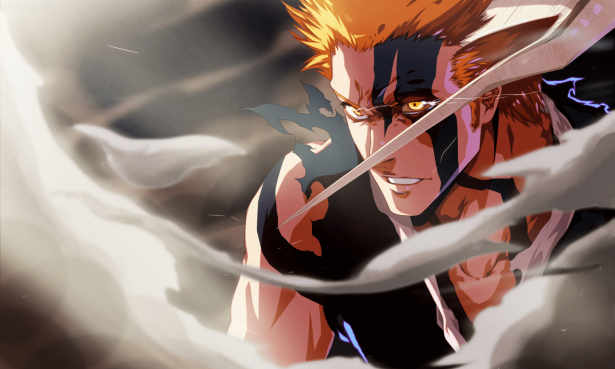 Ichigo is one of the teenagers attending Karakura High School and having the ability to see ghosts. He meets a Soul Reaper named Rukia Kuchiki from a secret organization called the Soul Society who are in charge of sending souls to the afterlife. At the same time, Ichigo’s family is attacked by a Hollow, a deceased spirit that became a warped soul-eating monster which Soul Reapers deal with. After being wounded in an attempt to shield Ichigo from a Hollow attack, Rukia transmits her Soul Reaper powers to him so he can save his family. In following months, Ichigo acts in Rukia’s place as the Soul Reaper in protecting Karakura Town from Hollows as their friendship continues to bloom. Ichigo’s past is also revealed as he faces the Grand Fisher, a hollow who killed his mother when he was nine years old. In time, the Soul Society sends two high-seated officers to take Rukia back for committing the crime of transferring her Soul Reaper powers to a human. In training with Kisuke Urahara in order to rescue Rukia, Ichigo obtains his own Soul Reaper powers and learns the name of his Zanpakutō, Zangetsu (literally “Slaying Moon”).

“All I need is the power to be able to protect my comrades. So long as I can have the strength to do that, I don’t care if I’m weaker than everyone in the world.”

Erza Scarlet is an S-class mage of the Fairy Tail Guild, the strongest still active female and one of the main female protagonists in Team Natsu. Erza is a tall, beautiful young woman with long red hair and brown eyes. She is almost always wearing an armored suit, made by Heart Kreuz. However, thanks to her Requip magic, she can wear many magic armors, and can even re-equip swimsuits, and clothes for recreational purposes. Her member stamp is on her left shoulder. She wears a standard medieval armor but has a number of other themed armors such as Flame (or Lightning) Empress, which absorb the respected magic type, Adamantium, Samurai-style and more.

“Perhaps, this is what I was looking for my whole life. I didn’t realize it until this very moment, but everything I wanted back then is right here before me now. Why don’t I ever realize what I have until it’s lost to me?

Guts, renowned by his epithet the “Black Swordsman“, is a former mercenary and branded wanderer who travels the world in a constant internal struggle between pursuing his own ends and protecting those dear to him. At one time driven solely by his will to survive, Guts finds purpose in life upon joining the Band of the Falcon, greatly helping in the faction’s storied successes during the Hundred-Year War as the Falcon’s Raiders Captain. He eventually becomes dissatisfied with clinging on to Griffith’s dream and departs from the Falcons in pursuit of his own. Following the horrors of the Eclipse prompted by Griffith, however, Guts embarks on a two-year war against the God Hand and apostles, becoming increasingly embittered on his one-track quest for retribution. He in time realizes protecting his regressed lover is more important to him, as well as something he cannot do alone, and thus seemingly abandons his quest for revenge while fostering camaraderie with his new companions.

“The life of each human is worth one life, that’s it. Nothing more, nothing less.”

King Bradley is one of the primary antagonists in the Fullmetal Alchemist series, being that he is one of the seven Homunculi. Bradley was also the original Führer of Amestris. In the manga series and the 2009 anime reboot, he was known as Wrath, the final homunculus created by Father, but was changed in the 2003 anime to Pride, created by the ancient alchemist Dante. In both series, Bradley is the leader of Amestris and is seen to have almost inhuman swordsmanship. However, in the manga and 2009 anime series, he is an important character being that Amestris was created for the sole purpose of exacting Father’s plan to become the ultimate being. As Führer, Bradley is the respected Commander-in-Chief of the State Military, even though his political standpoints are often questioned in certain instances such as the Ishval Civil War, which was only one of many insurrections focused on creating a massive Philosopher’s Stone for Father.

“When you point a sword at someone, either you kill them or they kill you, there ain’t no in between. So quit talkin’ like a fuckin’ pussy. Anyone who can’t handle that should just SHUT THE FUCK UP and GET OVER IT!”

Mugen is rude, vulgar, and often thinks highly of himself. Much of his past is a mystery. He was born on the Ryukyu Islands, never knew his parents, and was a former pirate. After an incident forced him to fake his death, he became a vagabond. But things changed after he met Jin and Fuu. Though very rough around the edges, he has a mutual understanding with Jin and cares for Fuu more than he lets out, considering he usually ends up going after her whenever she gets kidnapped. His fighting style is described as a “Champloo”, which means “mix”. It combines all sorts of martial arts, unorthodox swordplay, and break-dancing. He relies on instinct and reflex to surprise his enemies. His style of clothing represents the future, whereas Jin’s represents the past. His black hair is usually untidy and is similar in shape to an afro.

“Does a death wish cause you to talk to me that way?”

Hiei is known as Imiko” (“cursed child”) because he is a male fire demon born to a kōrime” (“ice maiden”), an all-female race. He was born male because his mother “interacted” with a male fire demon outside her isolationist Koorime community, which led to him being cast out as an infant and thrown over the mountain in which he was born. After surviving his fall down to the surface of Makai, he was found and raised by a gang of bandits, but it didn’t last long. After realizing the value of the Tear Stone shed by his mother at his birth, he wore the Stone in full view of everyone, hoping to attract enemies to kill. At the young age of five, prior to his acquisition of the Jagan, Hiei achieved A-class Youki status (according to Mukuro). As he grew older, he killed mostly for fun, causing those that survived to greatly fear and reject him. After he was rejected, he continued to wear his stone in full view, yet gathered an attachment to it, as it gave him a sense of calmness and kinship. Nonetheless, he lost it when he fought a demon, and he vowed to thenceforth search for it.

“I’m gonna slit your stomach, take out your guts, and put them in a bowl. By the time I’m through with you, you’re going to wish it was you who was dead.” 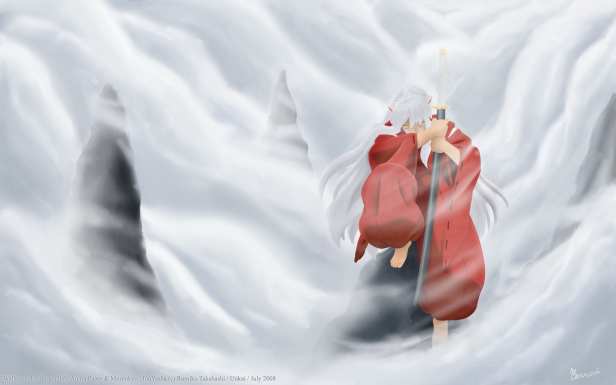 Inuyasha (“Dog Forest Spirit”) was an Inu-Hanyō, who was the second son of the famous Inu-Daiyōkai the Inu no Taishō and the human woman named Izayoi. He’s the main character of the series. 50 years ago, Inuyasha was pinned to a sacred tree by a sacred sealing arrow shot by the priestess Kikyō after he attempted to steal the Shikon no Tama fifty years prior to the main story’s timeline. Kagome Higurashi released him from the seal fifty years later, but soon after, she accidentally shattered the Shikon no Tama into hundreds of fragments. They reluctantly agreed to work together as a team on Kaede’s behalf to recover all of the fragments that had scattered across Feudal Japan before they fell into the wrong hands, though over time they develop a close bond and eventually fall in love.

Killer Bee is the former master of Samui, Karui, and Omoi from the Cloud village and is the Raikage’s kid brother. When he was 5 years old, he was chosen to be the new host for the Hachibi after his cousin, the previous host, lost control and died. Life became hard for Killer Bee, he became an outcast since everyone feared and hated the Hachibi. Killer Bee was unphased though, he was prideful and used music to express himself. He also did his best to not shame his brother. Killer Bee’s best friend, however, Motoi, secretly tried to kill him when they were still kids to get rid of the Hachibi once and for all, but failed and ran away in disgrace.

Who is your favorite one? Do you think anyone else deserves to be on the list? Please mention down your comments below and don’t forget to like and share Animoku an Anime Blog on

5 thoughts on “Top 10 Greatest Swordsmen to Ever Live in Anime- Animoku an Anime Blog.”